In Memory of Ron Vaulter 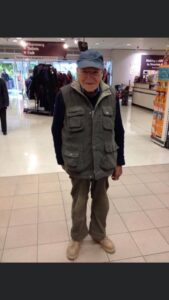 We work with an elderly, vulnerable, and sick client group a lot of the time, and that means several of our clients die each year.  Every death is sad for us all, but some leave more of an impact than others.  Below, Julie shares some memories of Ron Vaulter, who passed away peacefully on the 4th January 2021.

“Ron Vaulter was a beloved friend to all. Ron was a very independent gentleman, he loved having a chat on the telephone and being visited by his befriender, Alan. They enjoyed a game of Draughts, or Dominoes, or pottering about in his garden which was perfectly situated right by Coombe Cellars, where Ron was a frequent visitor.
When Ron was told he could no longer drive he was determined not to part company with his car. He spent many an hour simply sitting with a hot drink and his portable radio, having a doze! Eventually Ron ended up having a new battery in his car just so he didn’t need to carry his radio out each time. Ron said this was about having a bit of normality in his life.
I also recall the day I had tried many times to call Ron, but to no avail. As this was unusual, I became concerned. Alwyn had just begun her transport shift and offered to take me to his home to see if he was okay. When Ron opened his front door we could see that he was fine, but had no telephone line connection. He was reassured knowing we would call BT for him once back in the office. It wasn’t long before his landline was up and running and we could resume regular contact with him.
It was only in his passing that I learnt more about the good things he did in his younger life. It has reminded me that everyone we talk to has their own story and to always be mindful of this.”

Some comments about Ron from social media:

“Ron was one of the finest gentlemen that I have ever known. Working tirelessly for the youth of Shaldon and Teignmouth. . There should be a statue of him at King George V playing field!”
“RIP Radical Ron, he took me to hospital a few times & used to set up comps & help making ramps. I used to go to his place to build stuff. An absolute legend & as you said selflessly devoted his life to us all.”
“RIP Ron, what a gentleman, he used to take myself and many others all over the place playing unihoc. I recall us all going out of the windows of his car driving back after one game

. Top guy.”
“He was a great guy with a big heart.”
“Fantastic man who did everything for others. I thank you from the bottom of my heart Ron.”
“Such sad news, what Ron did for all the kids of Shaldon and Teignmouth was nothing but amazing, from the Shaldon Kestrels to 5 a side up at Broadmeadow in Sat afternoons, youth club, he is a legend!!!! R.I.P Ron.”

Our Support Worker, Jan, works closely with clients who are coming towards the end of life, and their families, to help make things a little easier at a difficult time.  Throughout the Coronavirus pandemic, that difficult time has often been even more difficult as families haven’t always been able to visit loved ones in hospital, or to give them the funeral that they would have otherwise.  To make a referral to Jan or for any of our services, please call 01626 771696 or email info@volunteeringinhealth.co.uk